What’s next for FOSS4G-Asia: Seoul!

After the success of the first FOSS4G-Asia in Bangkok last week, we could see a trend in this part of the world in the next years to come. The market seems to be dominated by users and small-medium enterprise for now. As for the use case, disaster management is likely to be on the top of the list, a prove of that is the most popular workshop was the InaSafe one (as a plugin in QGIS). This project uses OpenStreetMap data as input and other open data to analyse scenario of disaster on risk reduction. This project has been applied mostly in Indonesia which has built with the Australian government its capability of risk analysis with now over 1.3 millions of building mapped and involvement of HOT (OSM) Team over the years. With over 110 persons attending this FOSS4G-Asia event from 18 countries (Nigeria, Canada, Germany, Laos, South Korea, Vietnam, Indonesia, Japan, etc.), this event was more open to other parts of the world than what we could think at first.

The best user of FOSS4G-Asia was given to eHealth Africa in Nigeria for their work towards polio eradication and Ebola outbreak and their use of FOSS4G such as: OSRM, MapServer, QGIS and CKAN.
The best software development was given to MapMint and their team of developers.
Finally, this Asian community will be involved again next year at the international FOSS4G in Seoul (which will include a technical session only for Asia). 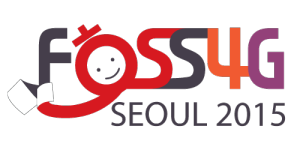 Sanghee Shin from South Korea gives seven reasons why people should go to Seoul next year, such as people (the Asian market is the biggest in the world), South Korea government investment in open source (9 million over the next years), the culture (Asian culture is vibrant) and most of all, because it is with distance that comes new connection!