Alex October 31 Comments Off on Webbrowser: Save maps for offline usage - Opensource solution

map.geo.admin.ch : now with offline function for usage in areas without network coverage Accessing maps in areas without network coverage is now possible with the map viewer of the federal geoportal, map.geo.admin.ch. A new function allows the download and local storage of a predefined map extent for offline usage. This new feature will meet the needs of individual users and ...

END_OF_DOCUMENT_TOKEN_TO_BE_REPLACED

“Synthicity originally developed GeoCanvas as an in-house tool for use by its team of data scientists. Faced with the difficult problem of how to rapidly visualize large scale urban data sets, and discouraged with the performance of off the shelf GIS tools, the team designed GeoCanvas to address their needs efficiently,” says Paul Waddell, President and Founder of Synthicity, and Chair of City and Regional Planning at UC Berkeley.

The in-house team depends on a suite of open-source software for data analysis, including PostGIS and Python with data science libraries. GeoCanvas was designed to interoperate closely with these tools to support an analytical workflow, and can connect directly to PostGIS databases, and import and join tabular data containing attributes for rapid data exploration.

GeoCanvas is not limited to visualizing parcels in cities. By supporting data formats such as the widely available shapefile for spatial geometry and text files for attribute data, it opens the possibility of rapid 3D spatial data visualization for a wide range of uses and users. The software is expected to be a great addition to the toolkits of students, researchers, and practitioners in fields as diverse as data science, geography, planning, real estate analysis, and market research. A set of video tutorials explaining the basic concepts and a range of examples have been made available to showcase the possibilities.

By providing a carefully curated set of tools, GeoCanvas eliminates a lot of the complexity inherent to traditional GIS systems, and presents a streamlined and intuitive user interface. This makes it easier to get up to speed quickly, and create great visualizations faster, for experts and beginners alike. For more advanced users that want to leverage the tools of scientific Python, GeoCanvas transforms their workflow into a visual data science laboratory.

END_OF_DOCUMENT_TOKEN_TO_BE_REPLACED

SuperSurv 3.2 for iOS also allows users to employ OpenStreepMap as the basemap to collect feature data including attribute data, and save the data in SHP and GEO formats. Besides, the Customized Attribute Table is offered to effectively cluster attribute data. Data like collected layer files and GPS tracklog can be exported through iTunes and utilized in various GIS programs. 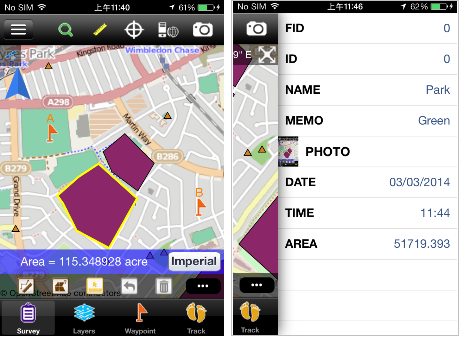 Supergeo software and applications have been spread over the world to be the backbone of the world’s mapping and spatial analysis. Supergeo is the professional GIS vendor, providing GIS-related users with complete GIS solutions for desktop, mobile, server, and Internet platforms.

END_OF_DOCUMENT_TOKEN_TO_BE_REPLACED 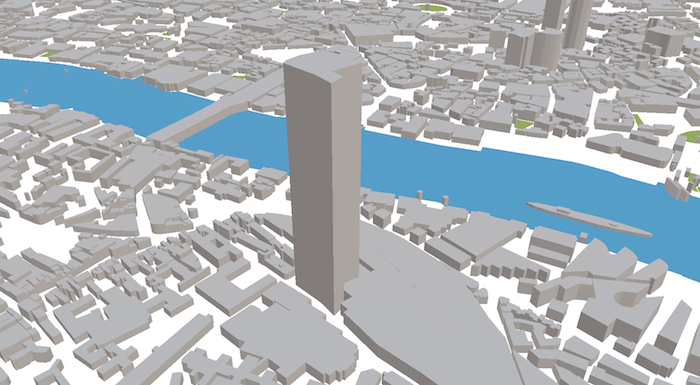 ViziCities is an open-source 3D city visualisation platform powered by JavaScript, WebGL, and OpenStreetMap. It allows you see OpenStreetMap data in 3D, anywhere in the world. A dynamic loading system allows you to move around and load new areas continuously, just like a Google Map. It's still in a very early stage, though development is accelerating now that it's open.
END_OF_DOCUMENT_TOKEN_TO_BE_REPLACED

Astun Technology is delighted to announce that it has won a  contract to supply a wide ranging GIS solution that will serve power and casual users of GIS software within the Council, partners in the MKi Observatory and the public through the Council’s website. The solution is underpinned by a fully featured Open Source spatial data warehouse that will provide access to the full range of Ordnance Survey base mapping, as well as the Council’s own mission critical data layers. The solution will also help the Council to meet its INSPIRE obligations.

This GIS refresh includes the adoption of QGIS Open Source software for power users. The remaining requirements are provided by Astun Technology’s iShare platform. iShare provides a fully featured public facing map portal with the ability to embed maps within web pages complete with location based searches, ‘find my nearest’ and incident reporting features.  Additionally iShare, will deliver GIS capabilities to users across the Council’s intranet, the MKi Observatory and via the Internet to mobile and homeworkers.  The whole Milton Keynes solution is delivered under an Open Enterprise Agreement which includes initial and ongoing training, consultancy and maintenance together with formal support contracts for the Open Source components.

“We are really looking forward to working with Milton Keynes Council on this exciting and prestigious project said Mike Saunt, Managing Director of Astun Technology. We will be making the most of Open Source technologies to deliver a hybrid solution tailored to the Council’s precise GIS needs,” continued Saunt.

END_OF_DOCUMENT_TOKEN_TO_BE_REPLACED

WMS is the standard protocol for streaming georeferenced map imagery over the Internet to web based applications, GIS and CAD software. WMS feeds load the imagery that a user needs to see, so it is a very convenient and efficient way for clients to subscribe to AeroGRID’s growing library of high resolution imagery. Users can confidently base their projects on AeroGRID data, which always comes with guaranteed accuracy due to long-term partnerships with well-established aerial survey companies.

“Our business requires access to precise orthophotos with an accuracy of better than 3m, and AeroGRID’s WMS service provides us with this imagery in an easy and cost effective way,” said Massimilano Vitale, RapidEye’s Chief Operating Officer.

“This contract exemplifies our core strengths” commented Miles Taylor, AeroGRID’s General Manager. “We provide unequalled wide area coverage for our clients with unparalleled accuracy and are playing a leading role in the development and wider adoption of WMS amongst the GIS community.”

AeroGRID is a one-stop-shop for international archived aerial imagery providing speedy access to aerial photography from over 60 countries with off-the-shelf high resolution satellite orthophotos for many others. By marshalling an impressive network of partner’s survey aircraft and high resolution digital cameras AeroGRID is able to extend coverage around the world. AeroGRID’s WMS servers provide instant access to orthophotos for 14 million km² from 23 countries in Europe, America and Africa with more countries added every month.

RapidEye is a leading provider of high-resolution satellite imagery. With a constellation of five Earth Observation satellites, RapidEye is able to image up to five million square kilometers of earth every day, and adds over one billion square kilometers of imagery to its archive every year. Online searching and viewing of its collection is quick and easy with EyeFind, RapidEye's archive discovery tool.

END_OF_DOCUMENT_TOKEN_TO_BE_REPLACED

Paris, France, 2nd October – Astrium Services’ GEO-Information and AeroGRID Ltd have signed a partnership for the distribution of Astrium GEO satellite imagery products. Users in the European Union can consequently resort to an additional source for accessing Astrium’s substantial portfolio of optical satellite data, as well as SPOTMaps mosaics available over more than 95 million km².

AeroGRID customers will have access to data from Astrium’s unique satellite fleet comprising the SPOT 5 and 6 optical satellite family and the high-resolution Pléiades constellation.  Through this agreement AeroGRID will not only offer its customers worldwide coverage of Astrium data at a variety of resolutions but also access to Astrium’s substantial portfolio of geo-information products, services and customised solutions.

AeroGRID has an unrivalled archive of worldwide aerial and satellite imagery providing speedy access to aerial photography from over 60 countries with off-the-shelf high resolution satellite orthophotos for many others. By marshalling an impressive network of partner’s survey aircraft and high resolution digital cameras AeroGRID is able to extend its coverage around the world. Much of this extensive image library is now available via WMS with WFS metadata, the standard protocols for streaming georeferenced data over the Internet to web based applications, GIS and CAD software. AeroGRID is also able to supply new orthophotos, DEMs and building models from aerial photography and satellite data worldwide.

Through its GEO-Information business, Astrium Services is recognized as one of the leaders in the geo-spatial information market, not least thanks to the now fully integrated skills and resources of the former Spot Image and Infoterra. The company provides decision-makers with complete solutions enabling them to increase security, boost agricultural performance, maximise oil & gas or mining operations, improve their management of natural resources, and protect the environment. It has exclusive access to data from the SPOT, TerraSAR-X, TanDEM-X and Pléiades satellites, coupled with a complete range of space-based data sources and airborne acquisition capability allowing it to offer an unrivalled scope of Earth observation products and services. This extensive portfolio covers the entire geo-information supply chain, from the generation of images to the provision of high added-value information to end-users.

By leveraging the synergies and expertise available across the whole of Astrium Services, its GEO-Information teams develop innovative, yet competitive, custom-made solutions based on the combination and integration of Earth observation, navigation and high-end telecommunications

FOSS4G, Nottingham, 18th September - Astun Technology reports an ever increasing interest from the Public Sector in its Open Source Geospatial solutions. Significant contracts won in mean that Astun is now serving over 60 public sector organisations including Local Authorities, National Parks, Emergency Services and Housing Associations. Demand has led to the development of a mix of solutions stretching from public facing map portals, enterprise GIS and Spatial Data Warehouses to Cloud based data hosting. All of these are built on Open Source technologies.

The Government position on Open Source has been clear from the outset. The austerity and cost saving brought on by the world financial crisis had led to a preference for open standards for software interoperability, data and document formats. The endorsement of open source by government is based on a range of factors including capability, cost and lack of vendor lock-in.

Astun Technology, an OSGeo sponsor founded in, has used Open Source from the beginning to underpin all of its software solutions. “Open Source has enabled us to develop on robust foundations safe in the knowledge that we are backed by a worldwide community of like minded developers,” said Mike Saunt company founder. “We don’t have to worry about restrictive vendor licensing and have the flexibility to provide our clients with real value. Whilst it is not always economic and often impractical to throw out proprietary in favour of Open Source the interoperability, issue often cited as barrier against wider adoption, just doesn’t hold water. If anything the opposite is the case; Open Source helps to set standards and acknowledges established ones. We have integrated our solutions successfully with over 60 different service delivery systems and work hard to maintain business continuity,” continued Saunt.

Cloud hosting solutions (Astun Cloud Services) are increasingly popular as authorities seek to cut their IT overhead. For GIS departments in particular, the management of spatial data and servers is now beginning to move off site and into the Cloud. Astun currently manages customer applications and the full national range of Ordnance Survey (OS) PSMA data along with OS OpenData base mapping. Astun provides feeds from other open data services too including Edubase, NHS Choices, Police UK, Land Registry Price Paid and Companies House data - all available as WFS feeds. Under the hood OSGeo technologies are hard at work. In one form or another over 100 public sector organisations are using Astun Cloud Services.

“We are finding that our public sector customers are now better informed about Open Source. The taboo that existed just a few years ago has largely melted away as organisations seek to deliver better value with solutions tailored to deliver precisely what they require,” said Mike Saunt. Even proprietary licensed Desktop GIS is taking a hit as organisations look to use open source alternatives such as Quantum GIS (QGIS). We started running training courses for PostgreSQL/PostGIS in on the back of existing customer demand and now there’s sufficient interest for us to run regular QGIS training too,” continued Saunt.