Found on engadget, it appears that a company is claiming all rights to navigating spatial reference images via a database. Here is more from the summary :

The saga continues for Google's voyeuristic mapping service, but this time Microsoft Streetside and Aol's MapQuest 360 View may be the Bonnie to Street View's Clyde. Transcenic, Inc. is suing the tech giants for acquiring the tools necessary to offer 3D mapping by less-than-legitimate means. The Louisiana-based company alleges that all named parties borrowed, without permission, a bit from a patent it owns on a 3D cartography technology that captures spatial reference images and uses a database to navigate them on command. Google has been in hot water for its maps before, but it no doubt hopes this legal tiff ends as well as its one for trespassing, where it only paid a pack of gum's worth of damages. If you're into reading all the current legalese, check out the source for the full complaint. Meanwhile, we'll find out if Cousin Vinny's on the case.

END_OF_DOCUMENT_TOKEN_TO_BE_REPLACED

Having two daughters at home does require a lot of energy! That's why this edition of the 'pertinent geonews in batch mode' covers the last two weeks. On the open source front:

On the Google front: On the Microsoft front: In the miscellaneous category: Slashdot ran a couple of geo-related discussions: In the maps category: END_OF_DOCUMENT_TOKEN_TO_BE_REPLACED

Earlier this week Microsoft announced changes to the way Bing Maps Streetside is displayed by desktop browsers. The introduction of the announcement: "If you take a look at a Bing map in Streetside view today you will notice that we’ve made a lot of changes. These changes represent a significant enhancement for desktop browsers, enabling you to quickly pan up and down the street to see the neighborhood and find businesses. We are doing this by providing street level panoramas so you can take a virtual walk through the streets with a view of locations and landmarks. As you slide the street level imagery sideways, the view of the sidewalk is seamlessly constructed including an overlay of business listings, street names and store fronts. Check it out in a flat, straight, New York street, or a steep, twisty, San Francisco one." A screenshot of what it looks like: 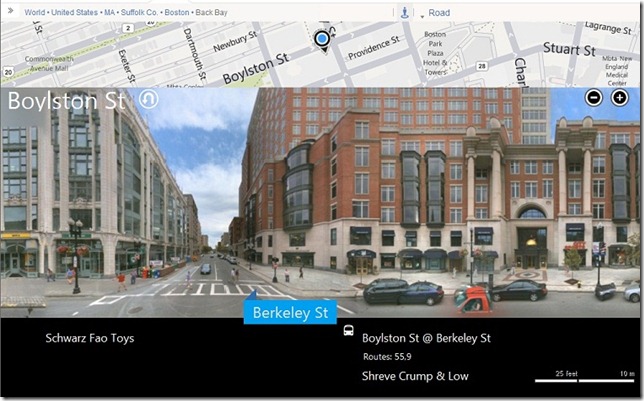 END_OF_DOCUMENT_TOKEN_TO_BE_REPLACED

Here's the Friday geonews in batch mode, exceptionally covering the last two weeks. We're now up to date regarding geospatial news! From the open source front:

Satri April 21 Comments Off on Thursday Geonews: Where 2.0 Coverage, ‘WorldMap’ Collaborative Mapping, More on Google Earth Builder, and much more

With the Easter break at the door, here's the recent geonews in batch mode. From the Google front:

From the open source/data front: From the Microsoft front: In the miscellaneous category: END_OF_DOCUMENT_TOKEN_TO_BE_REPLACED

Satri April 21 Comments Off on Where 2.0: Microsoft Shares their “Read/Write World” Plans

Yesterday at the Where 2.0 conference, Microsoft shared their plans regarding Bing's "Read/Write World", presented by Blaise Aguera y Arcas. Here's what it is: "The Read/Write World is a project to index, unify, and connect of the world’s geo-linked media. Consisting of a cloud-based geo-indexing, matching and processing services, the scenarios it will enable include:

There's plenty of screenshots in the entry if you want to see what it looks like. The announcement also mentions RML, "the new Reality Markup Language", I admit I never heard of it before. Also unclear is exactly what they mean when they mention open source in this sentence: "Microsoft will provide open source viewing code and cloud-based services to power the Read/Write World [...]". END_OF_DOCUMENT_TOKEN_TO_BE_REPLACED

Geoweb Guru offers a book review of "Beginning Spatial with SQL Server" by Alastair Aitchison. From the review: "In conclusion, this is recommended for those who are already familiar with SQL Server but who are looking to us it for geospatial applications or to use it as a backend database for a geospatial web application. It should also prove useful for those with geospatial knowledge who need to use SQL Server's geospatial extensions for the first time. Such readers may find that a general SQL Server book will prove to be a good complement to this text." On Amazon: [amazon 1430218290 full]

END_OF_DOCUMENT_TOKEN_TO_BE_REPLACED

From the Microsoft front: In the miscellaneous category: In the maps category: END_OF_DOCUMENT_TOKEN_TO_BE_REPLACED

Here's the recent geonews that haven't made it into an individual story in batch mode. From the open source / open data front:

From the ESRI front: In the everything-else category: In the maps category: END_OF_DOCUMENT_TOKEN_TO_BE_REPLACED

Here's recent geonews in batch mode. I will be away the reminder of the week, so expect less stories, but we'll take care of your submitted content. From the Google front: