Their summary with link to a BBC article: ""A patent granted to the U.S. tech firm describes how the eyewear could be used to bring up statistics over a wearer's view of a baseball game or details of characters in a play. The newly-released document was filed in May and is highly detailed. … Although some have questioned how many people would want to wear such devices, a recent report by Juniper Research indicated that the market for smart glasses and other next-generation wearable tech could be worth $1.5bn by and would multiply over following years." - Noticeable differences from Google's version: two lenses, a wrist computer, and wires." 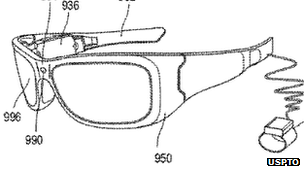