Via Ecostudies I learned that SpatiaLite 4.0.0 has just been released.

Here's the warning and relevant changes related to switching to 4.0: "SpatiaLite Version 4.0.0 introduces several relevant changes; many of these may potentially pose severe cross-version compatibility issues. Accordingly to the above premise, a good comprehension of any related detail will surely allow you to successfully master and resolve any transition issue." A reminder, "SpatiaLite is an open source library intended to extend the SQLite core to support fully fledged Spatial SQL capabilities. SQLite is intrinsically simple and lightweight [...]"

See also this related discussion (read the comments) on SpatiaLite, the Shapefile of the Future? Of course, we mentioned SpatiaLite several other times.

END_OF_DOCUMENT_TOKEN_TO_BE_REPLACED 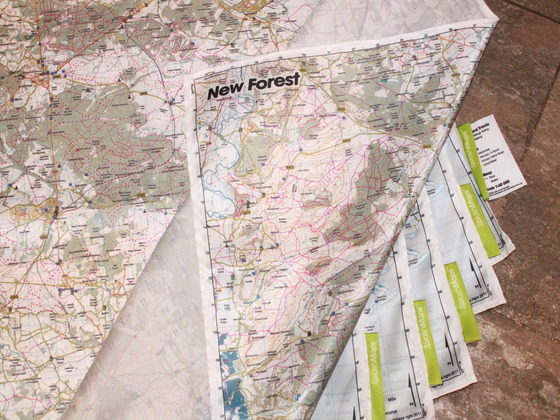 END_OF_DOCUMENT_TOKEN_TO_BE_REPLACED

Via James I learned that earlier this month was released Natural Earth v2.0.0. A quick reminder: "Natural Earth is a public domain map dataset available at 1:10m, 1:50m, and 1:110 million scales. Featuring tightly integrated vector and raster data, with Natural Earth you can make a variety of visually pleasing, well-crafted maps with cartography or GIS software." We mentioned this dataset in the past quite a few times.

END_OF_DOCUMENT_TOKEN_TO_BE_REPLACED

The serial winner of the FOSS4G WMS Shootout just got better, MapServer 6.2 has been released. We of course mentioned the open source web mapping server MapServer innumerable times.

END_OF_DOCUMENT_TOKEN_TO_BE_REPLACED

One of the main open source competitors to OpenLayers, Leaflet 0.4.5 has been released and they share their plans for version 0.5.

From the announcement: "Highlights of things already implemented in the master branch include touch interaction support for IE10 touch devices and Metro apps and a more smooth and responsive panning inertia. Follow the full changelog for more details. We’re also in the process of a major refactoring of vector rendering code to allow much simpler extension of base functionality with custom shapes, additional rendering systems (like WebGL in addition to existing SVG/VML and Canvas renderers), easy switching between renderers, also making the code simpler and easier to understand. The same goes for projection-related code to make using Leaflet with non-standard projections easier, inluding plain projections for game and indoor maps."

END_OF_DOCUMENT_TOKEN_TO_BE_REPLACED

We mentioned GeoNode quite a few times since, and now the project released version 1.2 of the open source GeoNode.

A quick reminder: "GeoNode is a platform for the management and publication of geospatial data. It brings together mature and stable open-source software projects under a consistent and easy-to-use interface allowing users, with little training, to quickly and easily share data and create interactive maps."

END_OF_DOCUMENT_TOKEN_TO_BE_REPLACED

davidoesch October 18 Comments Off on OpenLayers 3 – Call for Funding

Consider funding OpenLayers in order to use these great new possibilities:

OpenLayers 3 leverages the latest in browser advancements, with a full WebGL map renderer and a DOM/CSS based renderer where WebGL is not available. OpenLayers 3 will build on the vector rendering and editing functionality in the current version, supporting standards and community formats and protocols. The new version of the library will focus on performance, with a lightweight build optimized for mobile browsers, and usability, with an overhauled website and learning resource center. We’re excited to be giving OpenLayers a design and performance facelift while maintaining the breadth of functionality that OpenLayers users depend on. 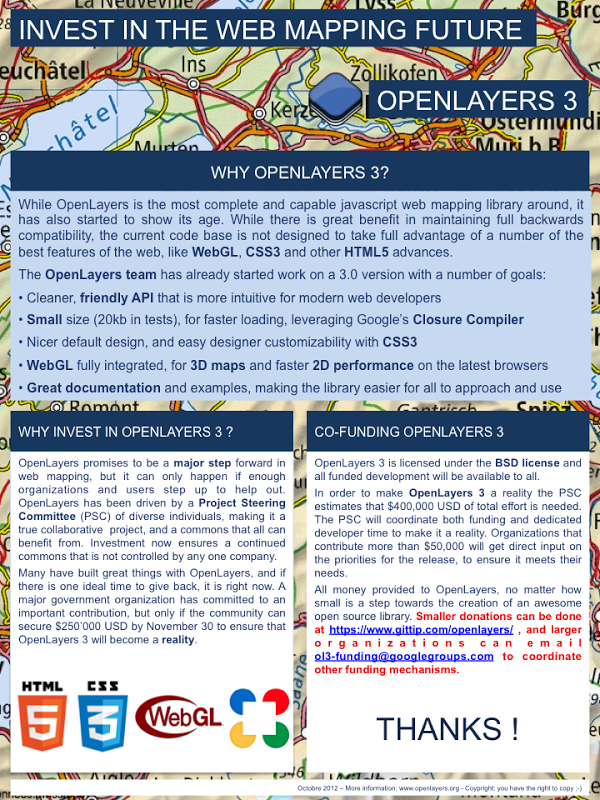 END_OF_DOCUMENT_TOKEN_TO_BE_REPLACED

Ok, I'm quite late on that one, TileMill 0.10.0 was released on September 19th. A reminder, TileMill is an open source map design studio by MapBox. We mentioned several times TileMill since early. James goes to the point where TileMill 0.10.0 'changes everything' and Brian use it as an example in his interesting article on GIS vs cartography, saying TileMill brings simplicity and attainable elegance.

From the 0.10.0 announcement: "This release redefines the creative possibilities for web cartography with its new support for compositing layers and features, achieving photoshop-like clipping, masking, blurring, or highlighting. This powerful set of compositing operations can be used seamlessly across vector and raster layers all using pure CartoCSS. The compositing now possible in TileMill, in combination with image patterns or raster hillshades, can enable effects of uniqueness and beauty that go beyond what has previously been possible." 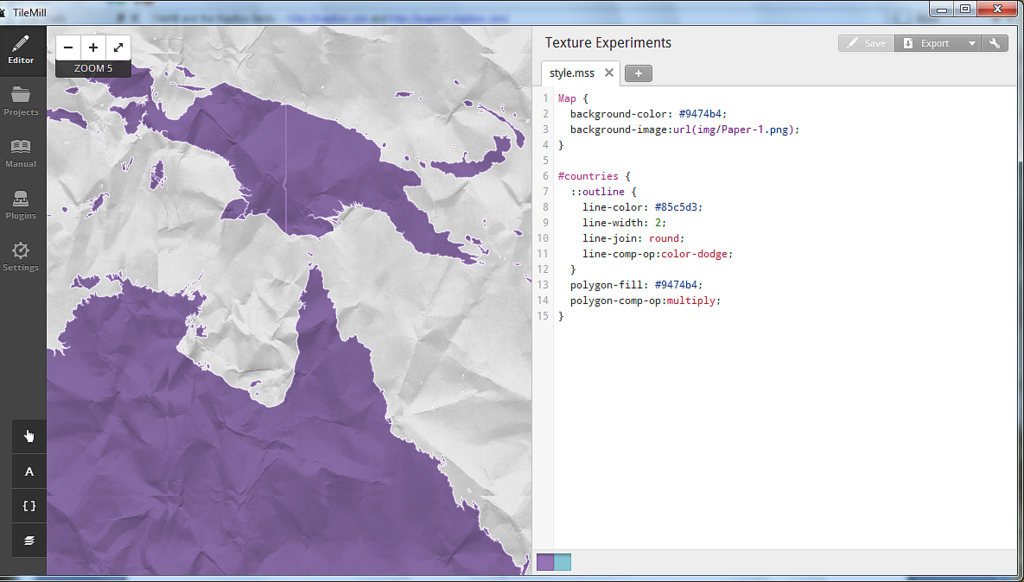 END_OF_DOCUMENT_TOKEN_TO_BE_REPLACED

The project that initially emerged from Autodesk and became MapGuide Open Source just released its version 2.4.

I haven't found a summary of the changes so far. There seems to be numerous improvements to MapGuide OS's core, to Fusion Tools and FDO. Here's what looks like their list of major new items:

My main question when MapGuide Open Source comes to my mind: what's the status of its adoption? I had a lot of hopes for it when Autodesk made MapGuide open source along with providing the financial support for OSGeo's birth, but it seems like MapGuide does not get much love nowadays, at least not as much as competing solutions like GeoServer and MapServer. Any comments?

END_OF_DOCUMENT_TOKEN_TO_BE_REPLACED

rk October 4 Comments Off on OpenGeo Suite 3.0 is Out!

Newest version of the OpenGeo Suite has just been released and it comes with the following goodies.